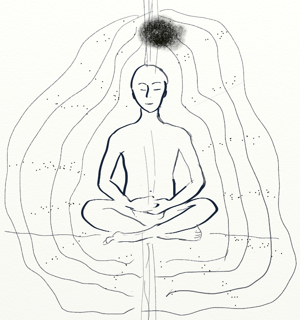 In my practice, I found that some people find it difficult to go into meditation or to experience Ultra-Height hypnosis. When questioned why, they often say that they perceive a blockage in the form of a dark cloud above their head or in the head area that does not allow them to ascend to higher levels of consciousness.

Based on my experience, I classified such blockages in the following way.

1. An energy blockage present in the spiritual channel that connects the personality to the Higher Self. It can be negative beliefs or negative thoughtforms.

2. Dark entity (or other types of non-human entities) attachment(s) in the head area.

An entity attachment is seen and felt as a ball or a blob of energy, a foreign inclusion in the aura.

4. Artifacts or devices inserted by dark entities in order to cut the person from the higher levels of consciousness. These can have a form of a dark blanket, a hood or any other object placed on the head of the person.

Such attachments and devices, besides cutting the person from experiencing higher consciousness, also create a feeling of being blocked in life.

People often describe this as ‘nothing is happening in my professional and personal life’, ‘nothing is working out for me’, ‘I do not know what to do in life”, ‘I see no future’.

These are the signs of an energy blockage in the head area and above.

Such blockages can also provoke a negative psychological response like depression, overeating or drinking because the person feels stuck with an invisible problem. These phenomena belong to the energy realm and cannot be properly helped by physical means like medicines.

An energist (that is a person who is working with energies) can help in such cases through the following:

All of these procedures can be handled by an experienced healer.

A person can also help himself through a prayer – by invoking to the Creator to help remove all attachments and the blockages and to show the true path.

A meditation on Violet Light is also a very powerful healing tool bestowed to the humankind. This tremendously powerful spiritual energy can rapidly transform and transmute all negativity in the person’s aura.

It is our right as human beings to ask Divine forces for help and to receive help. Every person has a right to walk freely along his chosen path towards evolution.

The most important thing is to understand that ‘being stuck against an invisible wall’ is an energy condition, and thus it can be removed and healed.

There are no upcoming events

Email: This email address is being protected from spambots. You need JavaScript enabled to view it.